21 days ago, my heart shattered into a gazillion pieces.

21 days ago, we heard the words no parent wants to hear. “He has Leukaemia. I’m sorry.”

In so far as rollercoasters go, right now I feel like I’m a hundred metres in the air, upside down, on the second loop. And the rollercoaster has broken down.

21 days into this journey, it still feels pretty surreal. But this isn’t a dream.

How we arrived at this point is really rather an unremarkable story, except for the fact that it has completely changed the course of our lives. About five weeks before the diagnosis, Sam went camping with all the men in our family – his grandfather, dad, brothers, uncles and cousins. They had a fabulous weekend, but he arrived home on the Sunday quite lethargic, with a fever and one swollen lymph node, just near his ear. We called the home-visiting doctor, who prescribed some antibiotics, and in the next two days Sam was back to his normal self. At the end of that week, I went to pick Sam up from kindy and was told that he’d had a fall in the sandpit that day and was complaining of a sore knee. He’d been upset at the time, but was fine when I picked him up. Later that afternoon, the boys were jumping with a friend on the trampoline. Someone accidentally fell against Sam’s leg and he cried. When he didn’t want to put any weight on his leg five days later, I took him to a busy local medical centre (not our usual one, but it was late in the day before a public holiday) and the GP we saw put it down to a combination of soft tissue strain and growing pains and sent us off to with instructions to treat with ibroprofen and a heat pack when required.

Over the next few weeks, Sam developed an occasional limp with his sore left knee. His swollen lymph node, while ‘annoying’ but not painful, never went away. He never complained about the knee much, but it definitely started impacting on our happy, active five year old. We began investigating further, taking Sam to an osteopath to treat the knee, back to our regular GP a few times, requesting an x-ray of the knee, ultrasound of the lymph node and a blood test. The x-ray and ultrasound both came back with ‘normal’ reports. While the blood test came back with a few numbers slightly outside of range, it didn’t raise any alarm bells, especially for a boy who had recently had been ill. All the experts kept saying they thought the knee and lymph node were unrelated. But the knee never got any better and the lymph node still didn’t go away, and that niggling parent intuition kept driving us forward.

About a week before the diagnosis, our very lovely regular GP asked if we would mind if she took Sam’s x-rays home to show her husband, an orthopaedic specialist, for a second opinion. Divine intervention. She rang the following day, reassuring me that it “could be nothing” but her husband had seen a shadow on the x-ray that might need some investigating and we were asked to come and see him at the hospital the following week. By the end of that hospital appointment, we were advised that Sam would need to go under a General Anaesthetic for an MRI on his knee, and there was an appointment available in two days time. It appeared that some of the bone behind Sam’s left knee had been eaten away and they suspected either an infection or a tumour and, from the descriptions, either option seemed likely.

From this point in the story, I was pretty much a mess. The suspicions, the testing, the fear, the waiting all seemed far too familiar and I decided that, frankly, it was far too early for us to be putting on our superhero capes again within two years of discovering that Nicholas had Down syndrome. My heart wasn’t ready for another heartbreak. But I received yet another reminder that I’m not the one in control.

We fronted up for the MRI two days later (a Saturday) and handed over our biggest boy to the medical staff for testing. Sam recovered well and quickly from the General Anaesthetic, then we sat for what felt like ages waiting for a specialist to come and deliver the verdict. One of the reception staff finally arrived to tell us that a CT scan was required for further information and ushered us into another room for another test. Then we returned to the waiting game. A good two hours later, an orthopaedic specialist appeared and my heart was in my mouth. But he still didn’t have a definitive answer for us. He saw this as a good thing that it wasn’t obviously a ‘bad’ answer, and asked us to return to the hospital on Monday morning at 9am to see yet another specialist. He said that it was very likely the next step would be to cut into Sam’s knee for a biopsy. We went home feeling somewhat relieved that there wasn’t an obvious tumour in Sam’s knee and tried to relax over the weekend. 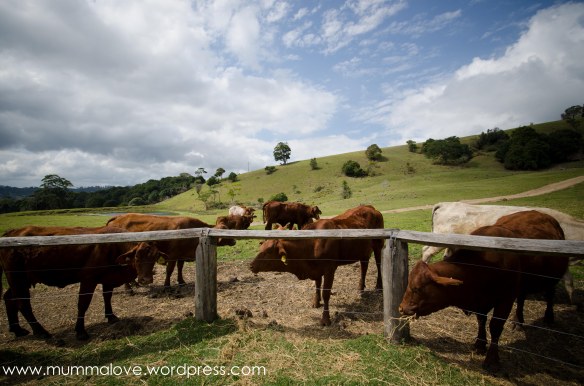 On Monday, both Ben and I took Sam into the 9am appointment with a more senior orthopaedic specialist, who was warm and friendly and sounded remarkably like Mister Maker. He put us all at ease while he gave Sam the once over, sent Sam for a blood test and a chest x-ray (to “rule out Leukaemia and Lymphoma”) and we all went our separate ways. We knew that a biopsy would most likely be completed in a different hospital and it was planned for a team of specialists to discuss Sam’s case later that day over at the Royal Children’s Hospital (RCH) so Ben went back to work, I went home to the boys and we figured we would get a call in the afternoon with more information. Despite being rather emotional before Saturday’s MRI, I felt surprisingly at peace that afternoon. Ben and I reassured each other via email, feeling as though everything was pointing to an infection. Leaving Sam and Nicholas playing in the backyard with Grandma, I took Charlie to casually pick up a few groceries. When we returned home, I was just about to make myself a coffee and some lunch when the phone rang. My heart lurched.

“It’s not great news, I’m afraid. It looks like Leukaemia.”

We were asked to head to the Royal Children’s Hospital as soon as possible, ask for the Oncologist and be prepared for Sam to be admitted into hospital that evening. 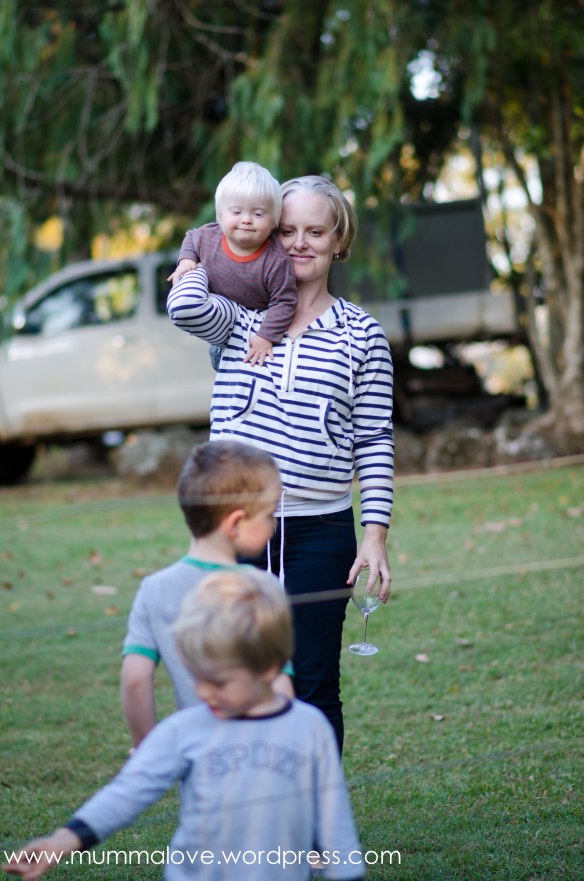 After ten days in hospital, we emerged with a truckload of medication, a whole new vocabulary of really big words and a treatment plan for the first four weeks of our new life with Acute Lymphoblastic Leukaemia (ALL). We emerged, focusing on the Oncologist’s words of “very curable” and “great prognosis”, feeling determined to approach this ‘new normal’ one day at a time.

I’d be completely lying if I said there weren’t many sad, angry, terrified, bewildered and crazy moments over the past three weeks… often all at once. And, yes, I would take this terrible illness away from my beloved Sam in an instant if I could. But, so often lately, I have heard one of us say, “We’re so lucky…” and giggled at how ludicrous that may sound given the situation. I am grateful for our thankful hearts that allow us to see how blessed we are in so many ways, despite the overall difficult diagnosis.

We feel lucky that the five of us escaped to a farmstay for a long weekend just before the diagnosis. We fed a menagerie of animals, went on a tractor ride, made campfires, sat under the stars, collected sticks, took photographs, made memories, connected as a family away from the real world for a little while. And we will treasure that moment in time.

We are so thankful that the diagnosis was made quickly and that Sam has begun this arduous process in a relatively healthy state; thankful that we live ten minutes from the hospital and have an amazing medical team looking after Sam; thankful that we have an incredible support network of family and friends surrounding us with oh so much love; and thankful for the partnership we have as a couple that allows Ben and I to face this new challenge as an indomitable team with our three little superheroes alongside us. 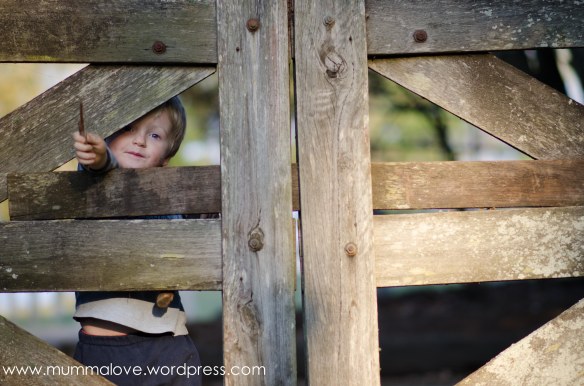 But, mostly, right now, we are thankful for the amazing kid who is currently sleeping soundly in his bed, who has faced this past three weeks with the most incredible strength and resilience, the cheekiest of grins, and wisdom beyond his five years. Our newest and most important job is simply to help our beautiful Sam get back to his active, happy life.

“There are moments in your life that make you and set the course for who you’re going to be. Sometimes they are little subtle moments. Sometimes they are big moments you never saw coming. No one asks for life to change, but it does. It’s what you do afterwards that counts. That’s when you find out who you are.”

I am so grateful for your thoughts and comments, so please reply below. Cancel reply

A month ago, we had no intention of taking our fir